The last day of Cisco Live 2018 started with a Security Innovation Showcase with Bret Hartman, Cisco VP and CTO of Security. He discussed best case security for worst case scenarios. In the last year we have seen cyber attack after cyber attack from Nyetya in July 2017 to VPNFilter which was detected last month.

Olympic Destroyer – a destructive nature malware that affected the Olympic computer systems during the opening ceremony of the 2018 Winter Olympic games in Pyeongchang, South Korea.

According to Gartner, cybercrime is a $6 Trillion market. To keep up with the growing cybercrime industry, Cisco security looks into the future of security – where its going, what attacks are like and what technology we need to build to anticipate those attacks. As we move forward we need seamless movement from security tool to tool. Customers need the ability easily move through detect, investigate, and remediate security breaches in a way that’s fast, automated and highly effective. Cisco security is about the power of integration. 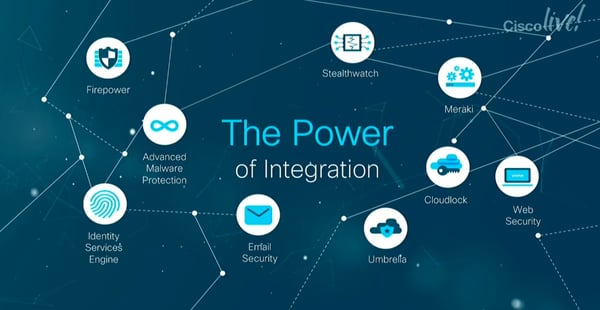 AMP for Endpoints - Earlier this year Cisco announced enhancements to its Advanced Malware Protections (AMP) for Endpoints platform including fileless malware detection and prevention, email security, and Cisco Visibility. Cisco Visibility is cloud application built into the endpoint console designed for threat hunting.  It combines threat intelligence from Talos and other 3rd parties with internal security data to provide a visual representation of the extent of any compromises in the network.

Cisco Live concluded with an insightful and engaging keynote from Quantitative Futurist, Amy Webb and Theoretical Physicist, Dr. Michio Kaku about AI and the future of technology. Both speakers brought humor, passion, and ingenuity to the stage. The insight and intelligence both speakers brought to the stage is hard to sum up, but if you take one thing from the keynote I would say it should be that “AI isn’t an outlier, or a tech trend, or a buzzword. AI represents the third era of computing behind tabulation and programmable systems.” – Amy Webb.

If you missed the keynote catch the broadcast here: